Cushman & Wakefield’s comprehensive coworking report examines all of the questions you have about this fast growing sector but didn’t know who to ask. Here are just a few:

How big can the coworking market get?
Despite an existing inventory of over 47.8 msf , coworking still represents less than 1% of office inventory in the 87 U.S. markets tracked by Cushman & Wakefield. Even in the largest coworking markets where coworking is most prevalent—such as Manhattan and San Francisco—it accounts for under 3% of all office space.

Coworking still has room to grow. Coworking providers continue to expand their footprints in the United States and around the globe at an aggressive pace. We expect that coworking could easily triple its American footprint in the foreseeable future, and certain high-density markets could see 5%-10% of office inventory square footage made up of coworking spaces.

What happens in the next economic downturn?
There will be an economic slowdown at some point in the next few years. Cushman & Wakefield forecasts real GDP to start to decelerate in 2019. Most modern coworking firms have not been around long enough to have survived a recession. However, Regus (now IWG) reported occupancy declines of 6% after the most recent recession (between 2008 and 2010). Regus was able to weather that storm, and we believe today’s largest coworking providers are in better positions to withstand a decline in occupancy similar to that experienced during the Great Recession. The leading coworking companies are conservative with their pro formas, have raised significant venture capital that offer cash reserves, and are diversifying their service offerings in ways that will provide continued income even during a downturn

While it is difficult to quantify how much of coworking absorption is additive versus dilutive to traditional office demand, overlaying vacancy and membership data collected by deskmag , we can estimate how much space is new and how much is borrowed. Large providers have recently reported approximately 20% vacancy, which is additive square footage that wouldn’t otherwise be leased. Nearly half of all members are identified as freelancers or “other.” The space occupied by these members is most likely purely additive since these workers would not be utilizing office space if not for a coworking option.

The other half of members are employers or employees. A portion of these are also additive—very small companies and start-ups that otherwise would not be big or liquid enough to lease space. The majority of employers and employees are dilutive, however, as they are large- and medium-sized companies utilizing coworking to reduce their traditional office footprints. It is our estimate that 30-40% of coworking space is accretive, meaning every 1 msf of new coworking space leased adds 300,000 sf to 400,000 of new absorption that would not otherwise be in the office market . 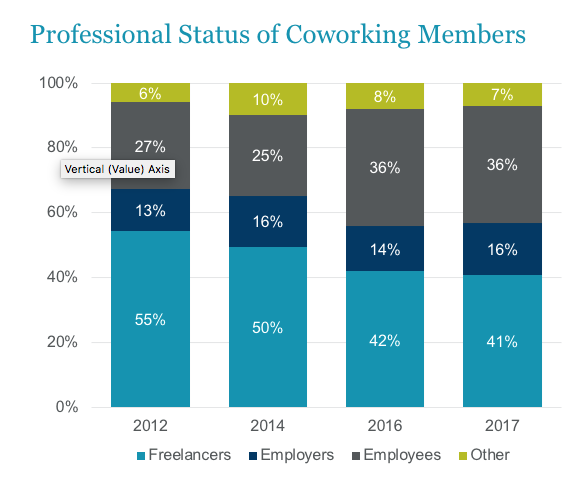 How does coworking impact building valuations?
An analysis of 17 building sales since early 2016 where a coworking occupier was a tenant does show that investors have been comfortable with up to 15-30% of the building being dedicated to coworking. In those cases, the cap rate was in line with or below what would be expected in the given submarket. As the proportion of the building dedicated to cowork space increased beyond that range, the cap rates exceeded the local submarket benchmarks.

The comfort and/or premium associated with coworking will vary by investor and lender. It is our expectation that both investors and lenders will continue to grow more comfortable with building sales containing coworking occupancy, but there may continue to be a discount in cases where the coworking provider leases the vast majority of the building.

For more on these questions—and many more—view the full report here.