The most iconic Cleveland, Ohio landmark buildings have been a source of pride for local residents for more than a century. Many of these structures played pivotal roles in the development and success of Cleveland’s economy and continue to serve as beacons of industry and culture.

From opulent Neoclassical banks to historic printing facilities, these are the most striking, recognizable and iconic buildings in Cleveland, Ohio.

Anyone wishing to experience the grandeur and beauty of Cleveland at the turn of the twentieth century needs only to step into the Old Arcade on Euclid Avenue. Constructed in 1890, the Arcade has the honor of being recognized as America’s first indoor shopping center, as well as Cleveland’s first building listed on the National Register of Historic Places.

The Arcade received financing from John D. Rockefeller and other business tycoons, and was partially inspired by Milan’s Galleria Vittorio Emanuele. This five-story glass atrium with ornate metal decorative work has earned the nickname “Cleveland’s Crystal Palace” and is a shining symbol of the city’s early economic success.

Modern visitors to the Arcade can shop for designer clothing and jewelry, indulge in pampering spa treatments, or enjoy dinner and drinks at the Hyatt Regency’s 1890 Restaurant & Lounge. 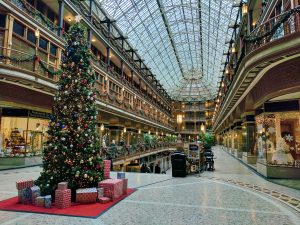 It’s no secret that John D. Rockefeller was instrumental in building Cleveland into a powerhouse of industry and manufacturing. Many structures throughout the city bear his name, but the Rockefeller Building in downtown Cleveland is one of the most iconic.

This historic high-rise was constructed between 1903 and 1905, and rises 17 stories above the streets of the Warehouse District. The name “Rockefeller” has been prominently displayed on the side of the building since 1905, except for a brief period between 1921 and 1923 when it was renamed the “Kirby Building.”

The Rockefeller Building now serves as a commercial office space for budding Cleveland businesses. It was added to the National Register of Historic Places in 1973. 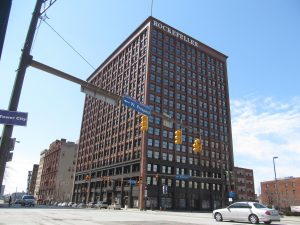 Constructed in 1903 by six successful Cleveland entrepreneurs, the Caxton Building has served as a hub of innovation for more than 115 years. It was named in honor of William Caxton, the first to introduce the printing press to England.

The Caxton Building was originally constructed as an office space for designers, artists, publishers and architects, and was known for having most modern amenities for its time. Over the years it has housed a number of business tenants, including The World Publishing Company, the printer of Webster’s New World Dictionary.

Today, the Caxton Building continues to serve as a workspace for entrepreneurs, startups and other businesses. It was added to the National Register of Historic Places in 1973, and declared a Cleveland historical landmark in 1976. 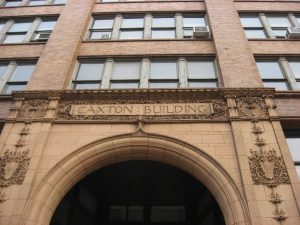 The Cleveland Trust Company Building is easily recognizable for its white granite exterior,  Corinthian columns, massive bronze doors and glass-enclosed rotunda—all of which contribute to the building’s air of prestige and opulence. It was added to the National Register of Historic Places in 1973.

Following a merger with KeyBank, the building closed to the public in December 1996. Cuyahoga County purchased the structure in 2005, then resold the building to the Geis Cos. in 2012. Today the Cleveland Trust Company Building houses Heinen’s Fine Foods, as well as a cafe and bar. 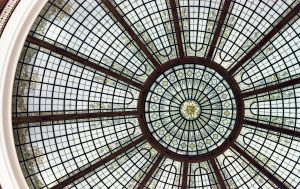 The pride of downtown Cleveland, Playhouse Square is the nation’s second-largest performing arts center, eclipsed only by Lincoln Center New York City. It was constructed over a span of 19 months in the early 1920s, and resulted in the opening of five opulent theaters: Ohio (renamed Mimi Ohio), State (renamed KeyBank State), Hanna, Allen and Palace (renamed Connor Palace).

For more than 40 years, the theaters presented a number of plays, vaudeville shows and silent films, until the rise of television and suburbanization led to their closing. A grassroots effort to save and revive the theaters was launched in the 1970s, and the restoration process lasted throughout the 80s and 90s.

Today, Playhouse Square boasts ten theaters and a number of resident performing companies. The saving of Playhouse Square is regarded as “one of the top ten successes in Cleveland history.” 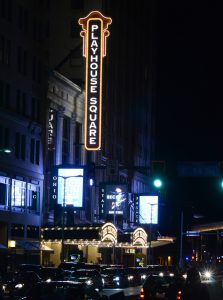