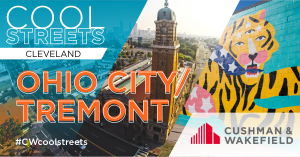 The annual assessment started in 2016, aimed at identifying unique real estate opportunities as alternatives to traditional retail districts during the revolution in retail. The “Cool Streets” highlighted in the report are largely notable for their embrace of the unconventional, out-of-the-box, and the cool. They are also considered up-and-coming trade areas driven by dramatic demographic shifts, authentic roots and the preference for urban living, particularly among the Millennial generation. 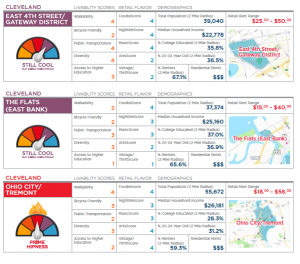 Ohio City / Tremont is highlighted as one of the neighborhoods that has actively, and successfully, encouraged the live/work/play environments that have become so critical to attracting new businesses and workforce talent.

“The ‘Cool Streets’ are about so much more than simply retail. They highlight the nexus trends of affordability, walkability, transit, mixed-use and, above all, talent,” said Nathan Kelly, Managing Director of Cushman & Wakefield | CRESCO in Cleveland. “The positive attention is exciting and serves to reaffirm what we Clevelanders have always known about our beloved city and neighborhoods.”

“Historic building stock, walkable streets, proximity to Downtown, and iconic assets like the West Side Market all help to give Ohio City a unique and authentic sense of place,” said Tom McNair, Executive Director of Ohio City Inc. “As we continue to grow, we are thrilled to be recognized by Cushman and Wakefield as having some of North America’s coolest streets, and look forward to working with partners as we continue to revitalize one of the country’s greatest neighborhoods.”

The report notes that Ohio City and Tremont are among Cleveland’s oldest neighborhoods that are still heavily influenced today by their German, Irish and Eastern European immigration roots, and their roots are part of what makes it “cool.” Thanks to strong transportation infrastructure and access to surrounding parks and trails, the neighborhoods have significantly accelerated their growth, and are among Cleveland’s most sought after places to live. According to the report, the neighborhoods achieve “Prime Hipness” on their Hip-O-Meter.

Ohio City/Tremont join 19 other rising districts across the country such as Whole City in Portland, Fulton Market in Chicago, Old Fourth Ward in Atlanta and the Historic Third Ward in Milwaukee.