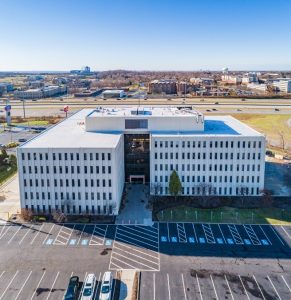 The grand opening of Pinecrest in June 2018 marked an explosion of new retail, office & residential opportunities for Northeast Ohio. The $230 million development continues to announce unique entertainment and retail features not offered anywhere else in the area.

On the surface, the development is an exciting new experience that has never been seen before. At a closer look, the entire surrounding area is becoming a bright beacon of economic and real estate growth, attracting the attention of developers and investors from all over.

Buildings and properties that were once overlooked or abandoned are now being seen as valuable opportunities in an exciting new market.

Orangewood Place was one of the first on the list. The 126,000 square foot office/medical building was long overlooked as a tired and low value property. It sat on the market for many years, where it went through foreclosure and several various transactions before it landed in auction.

For Rose & Berg Realty Group, the building was the perfect opportunity to break into the Cleveland market. Located in New York City, the firm boasts nearly 1 million square feet of commercial, retail, industrial & developmental real estate in their portfolio, with a recent expansion into South Florida. As their portfolio continues to expand, they are always on the lookout for the next valuable market. With the city still riding the wave of what some might say was the “Summer of Cleveland” in 2016, with the NBA Championship and RNC convention putting all eyes on the city – people started to take notice. By the time Pinecrest broke ground, outside investors were already in pursuit.

“The Cleveland market has been historically stable with high occupancy rates. With Pinecrest (at the time) being built, and other strong market activity, we saw an opportunity,” said R&B Principal, Shelby Rosenberg.

R&B purchased the property in 2017, knowing that there was significant investment to be made to the property if they were to transform it into a building worthy of being adjacent to a high-demand place like Pinecrest.

“The Orangewood Place building is prime location off of I-271 situated in between Chagrin corridor and Pinecrest, with restaurants and shops walking distance,” continued Rosenberg. “The building previously had been looked past due to its outdated aesthetics, deferred maintenance and needed Capital Improvements. We again, saw that as an opportunity. Since ownership, we remodeled the lobby, repaired the roof, repaired the parking garage, and upgraded bathrooms.”

After months spent upgrading the property, then it was time to fill the space. According to Rosenberg, they wanted to work with a firm that could not only close transactions, but who would share the same vision for the space, and fill it with tenants who could continue to add value.

“We partnered with CRESCO because of their professionalism, market knowledge and eagerness to realize the value we saw (and now share) with Connor Redman & David Leb,” said Rosenberg.

For Connor, working with an outside company like R&B on their first investment in Cleveland is an opportunity to not only share his knowledge of the area, but also to provide guidance and advisement on what it’s like working in a Cleveland real estate market versus a faster-paced one like New York City.

“Real estate deals in NYC are much different – the market here moves at a different pace, and it can be somewhat of an adjustment for companies who might be used to operating faster and with higher volume,” says Connor. “But I’m excited to work with R&B on this property not only because CRESCO has a strong presence here, but it’s for a property that we’ve long felt would be a value-add opportunity for clients who want terrific visibility, in an upgraded space, with better value.”

R&B continues to make updates to the property with the goal of filling the remaining 30,000 sf of available office/medical space. Current tenants range from tech startups to professional service firms, and both CRESCO and R&B reiterate that all tenants in Orangewood Place enjoy the best value with the most updated finishes, terrific visibility & proximity to unparalleled entertainment.