Home > Blog > Cleveland > What on Earth is Going on in the Flats South? 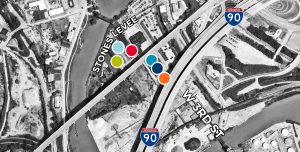 We’ve been promised revitalization of the Flats South and the city of Cleveland is ready for it. The gentrification of a rust belt neighborhood written off as an urban casualty needs something to prime the pump and establish it as a destination. And that something is whiskey!

Enter Cleveland Whiskey. In 2020 the local distiller signed a long-term lease at 501 and 601 Stones Levee Road, with plans for a multi-million-dollar renovation that began this spring. Internal sources say that this renovation, coupled with the new deals in the area, has brought more looks and opportunities to the Flats South District.

The newest tenant to the Flats South is Firelands Scientific. Adding to their locations in Westlake and Huron, this fast-growing medicinal cannabis company will be adding to their office ranks at the new dispensary site. Since being awarded their latest medicinal marijuana license this spring, they’ve begun to prepare for their 6,500 SF occupancy at 1978 West 3rd with a tentative open date in fall 2022.

The district is achieving a critical mass, and multi-family developers have taken note. Proposals are underway to develop nearly 200 apartment units, rivaling the apartment density further north in the Flats.

While we see this district quickly filling up with tenants, there’s still time to get in at the ground floor. Our team of retail experts is here to help you find your own retail Mecca, whether it be an up-and-coming former rust belt neighborhood, best-in-class showroom space, or anything in between. Contact us today for more information.